The Race is on: a New Digital Financial Identity for Every Global Citizen

Who will win this race? The corporate world, the banking world or the world's governments? And why is the Pope involved?

As the Fortune + Time Global Forum at the Vatican last December drew to a close, the world's most powerful companies listened attentively to Pope Francis when he reiterated his call for "a new dialogue about how we are shaping the future of the planet".

The CEOs of these big corporations knew exactly what he was talking about. For some time, a number of disturbing developments had cast doubts on their confidence to continue doing business as usual into the future. Brewing popular unrest, evident by the rise of populism and forceful state responses throughout 2016 made them anxious about their commercial security.

As if this wasn't enough, there is another storm brewing on the horizon: the dark clouds of teetering currencies, fragile monetary unions and the last days of the dollar as a global reserve currency make for some worrisome economic weather reports. This isn't new - for years, various institutions have been pooling their best talents to come up with an answer to face the coming worldwide financial turbulence with the right survival tools.

One such tool looks very promising: blockchain technology, suitable for much more than just money transfers. Small projects are being tested, and the better known bitcoin technology is already operational and receiving good reviews. Despite some reports to the contrary, many governments and banks are responding optimistically to its potential and are busy exploring ways to put the technology to their own advantage.

However, this hasn't put the large corporations at ease. Far from it. There is still the problem of trust. Banks and other financial institutions like Paypal, Visa and SWIFT serve as middle men in money transfers. These middle men in turn are vulnerable to government decisions and economic shifts. Companies resent the cost and slow processing of their money transfers in this murky and cumbersome system which seems to be on the verge of collapse. As if the Richard Bransons, Jeff Bezosses and Eric Schmidts don't have enough to worry about already. If only the blockchain technology could be implemented under the watchful eye of a trusted neutral party, then it would be the perfect match to a global financial identity for all of mankind. (In the Czech republic, implanted RFID chips are already being used with bitcoin)

And finally, the reaches of the third world with its riches and vast potential for growth and profit has been a thorn in the sides of these big boys and girls. The more rural an economy, the more independent the people are - trading in cash or barter, choosing their own methods for agriculture, business or health care and education - reaching these virgin markets would provide companies with vast commercial possibilities. But without a centralised digital economy, companies are powerless to plug into this potential for profit.

So when the Pope showed himself to be on their side in looking for a solution, they were more than happy to reply:

Perhaps they were thinking: "This Pope is marvellous - he really understands our predicament!" So they continued:


More than 2 billion adults in emerging economies do not have access to basic checking or savings accounts, with women, the rural poor more financially excluded than others. Refugees fleeing violence cannot begin to rebuild their lives without access to banking.

Still, there remain obstacles to achieving the World Bank's goal of Universal Financial Access (UFA) by 2020. Among these are the ongoing challenges of servicing hard-to-reach populations.

Here is what we propose: Jump start underserved markets. Companies will support initiatives to produce digital identities for the one-fifth of global citizens who lack one.

They put this undertaking right at the top of their list of priorities. Because a digital financial identity will be the key to receiving (or delivering) their products: vaccines, schools, clean water and agricultural products like GMO seeds.

But the corporations are not the only organisations with an interest in a digital identity system to give them more elbow room in the markets. Banks and governments are thinking along similar lines. Take the United Nations and their ID2020 collaborative: "... creating a hub to harness the world's best digital identity technology to provide a legal identity for all."


The United Nations has recognised that identity is a necessary amd fundamental human right and has included "provid[ing a] legal identity for all, including birth registration by 2030" as one of its sustainable development goals (UN target 16.9)


Extraordinary developments. Finally, there remains one question: who can unite all these diverging interests and efforts? Who is able to curry enough favour and trust to be accepted as the Lord Protector and Patron of all Global Citizens? Perhaps that is the reason why Pope Francis has shown such an interest in the digital global identity project. 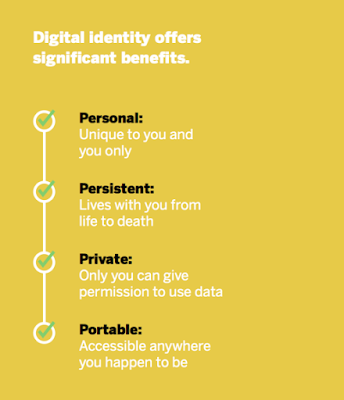 Posted by Bernice Bartelds at 15:40