New: Digital ID and Gold on the Blockchain

It was only a matter of time before the full scale of possibilities of blockchains became reality. What is currently in the hands of a select group of innovative and daring investors could easily become the norm in a breathtakingly short time.

Astonishing new development: Trading with gold on the blockchain 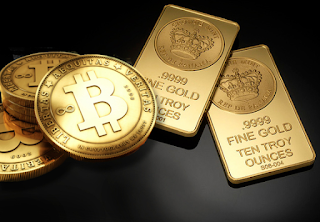 ZenGold is an organisation, or project as they call themselves, to buy and sell assets with gold on a blockchain called Metaverse. The ICO  (Initial Coin Offering) period started last Friday 26th May, and was intended to last for 15 days, but due to popular demand sold out in 30 minutes!


One week after the funding campaign is completed,  ZGC tokens belonging to each ICO participant will be determined based on the total amount raised and the ZGC tokens transferred to the individual user accounts. One month after the ICO completion and token distribution, ZGC tokens are planned to be traded on the selected exchanges contacted prior to the end of the ICO campaign.  www.zengold.org


New: the Digital Identity System
If this sounds very technical to you, all you need to remember is this new development of trading with gold on blockchain technology. Buyers and sellers can now do business without having to lug the heavy metal around. Or, as the CEO of Open Ledger explains: "ZenGold tokens will enable its holders to use gold as an effective payment system and credit mechanism while benefiting from the transactional functionalities of Blockchain technology".

The goal of ZenGold is to reduce volatility in the cryptocurrency world. ZenGold ties the price of its token to something tangible – a gram of gold. By extension, ZenGold allows holders to effectively use gold as a payment platform – they just use tokens as a representation of that gold. Users can pay with gold while benefiting from the transactional benefits of blockchain technology. https://bitcoinexchangeguide.com/zengold

The implications are huge. It means that the petrodollar is now well and truly dying. Analysts will have a field day in the coming days, weeks and months as the repercussions of this and similar developments sweep the globe. (see the links below) But there is more: in the right hand bottom corner of the ZenGold homepage, a Digital Identity System is mentioned. And this is where we should all sit up and take notice. Look beyond the economic shifts. Ignore for now the jubilant reactions of perceived deliverance from the yoke of the banksters.


Identification of every person, organization, asset on Metaverse ensures absolute ownership and creates a public, transparent credit system for all (bold emphases mine)

The link to the ZenGold Digital Identity System doesn't work (yet?), but here we see those three elements combined for the first time: gold, a blockchain database and a digital ID.

Update 9 July 2017:
In his interview on King World News, Andrew Maguire broke this news: "I am absolutely certain that there are sovereign central bank sized entities that are about to turn gold into a blockchain currency. And I have direct evidence that this will come in very soon, well before gold buying season kicks in.... well over a billion dollars, well over 250 tonnes to hit the market..." Earlier on he explained that september is traditionally the time when big buyers get their gold.


This is to me the most striking example of where the blockchain technology is headed. Don't get me wrong, I think the idea is basically a good one as it provides an antidote to the vile excesses and thefts of our current global financial system. As long as it stays out of the hands of power mad manipulators, I personally see this as a viable stop gap until a righteous financial system is established as promised in the Bible. Unfortunately, the same book also paints a picture of a world run my 'merchants' in a vise-like system where identity and the freedom to be economically active are inextricably linked and in the hands of a cruel dictator.

Meanwhile, we are seeing some astonishingly rapid developments here. Below are links for more riveting reading and watching. And if you haven't done so already, read the other articles on this blog to educate yourself about some sinister plans and organisations that are operating in the shadows for the time being.

Posted by Bernice Bartelds at 15:39