UN Monster Eye in the Sky 'for the good of humanity'

I am reading a lot about young and eager scientists being invited to work on ID2020. I'm even wondering if they all know what they are creating. From so-called hackathons where restless brilliant young techies feverishly compete and collaborate to show off their creative talents, to the sumptuously funded Chan Zuckerberg BioHub, the "new frontier" of biotech where, I suspect, they are working hard to find the technology to incorporate the Digital Financial Identity into every global citizen's body as well as mind control techniques.

All seeing monster eye in the sky: "for the good of humanity"
It is the background to today's article from CoinDesk, whose main interest lies in the blockchain and related developments. Here we see the call of power hungry globalists who want to create that all seeing monster eye in the sky. They need smart people to make it happen for them, collaborating under their overview in special interest groups. Here we see that nudge again: 'ID2020 is for the common good'. The same blatant lie as Cardinal Peter Turkson used to woo the big corporations when they converged at the Vatican last December: "transformative role... as co-creators and partners with God... to serve the good of humanity"

The project has many aspects, many pilots, and countless individuals who need to be persuaded to be actively involved in either its creation, its accompanying laws,, the priming of the public and the infrastructure and bureaucracy to feed this monstrosity once it is operational. The project is huge.

Is anyone paying attention?
And as the nightmare starts to unfold, we see the secrecy surrounding it fade while one step after another is achieved without so much as a murmur from the public. With each week, it becomes easier for me to wrest the information from the web. And with each week, I am astonished at how few people are paying any attention to what I am saying and writing. 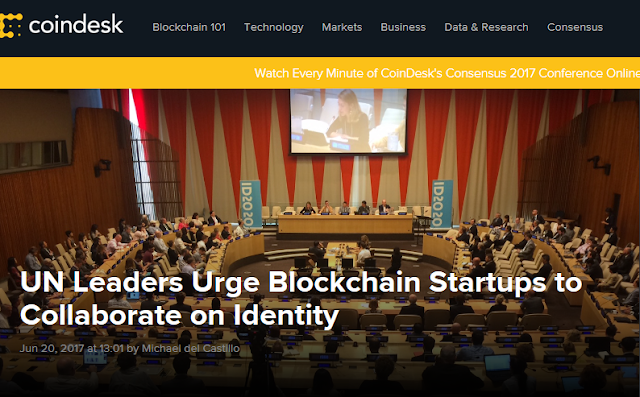 Offering the United Nations a blockchain "silver bullet" is not the best way to work with the global organization, according to the lead electoral advisor at the UN Development Programme (UNDP).

Instead of pitching their product as a panacea to solve all the world's problems, startups working with blockchain and other technologies to improve digital identities need to begin to view their solutions as part of a collective good, according to Niall McCann, speaking yesterday at the UN's ID2020 event on the future of identity.

Addressing a group of about 500 employees of governments, non-profits and corporations, McCann riveted the audience with his call for inter-agency cooperation, as well as cooperation between blockchain startups and other innovators, to better serve the estimated 1.5 billion people globally that do not have legal identities.

McCann said: "If the private tech sector could collectively work with the UN and collectively go together, I think we can solve that problem."

Specifically, McCann mentioned a digital identity management project the UNDP had "just started", which he said could be implemented by national governments.

Though he didn't mention whether the project specifically employs blockchain tech, McCann included blockchain startups among those he encouraged to take a collective approach.

"We need the private sector to be part of this project," he said.

Echoing McCann's remarks, Atefeh Riazi, chief information officer of the UN, also called for the tech sector to work more closely together and with her organization.

Bigger than an agency
In April, CoinDesk first reported that the UNDP organization with which McCann works was one of seven UN agencies exploring blockchain. Since then, several other UN agencies have joined a working group aimed at helping agencies that might otherwise compete for resources to share what they’ve learned about blockchain and use cases such as identity.

Throughout the one-day event, speakers covered a wide range of potential identity solutions that could help the UN and the governments that comprise the organization.

Following a presentation by Accenture's capital markets blockchain global lead, David Treat, who demoed a new identity solution that uses blockchain, Microsoft’s global business strategist in charge of blockchain, Yorke Rhodes, announced the launch of the ID2020 Alliance – a group of firms and organizations that will work to bring a "safe, verifiable and persistent digital identification system to scale".

In spite of a diverse set of possible solutions discussed at the event, the general consensus was that, regardless of which platform is finally used by various UN agencies and their member states, the final owner of the data should be the recipients of the aid.

That's opposed to a model being employed by many tech companies that give away their services for free but profit by selling access to their users profiles, according to Karl Steinacker, the nation of Niger's representative for the UN's refugee agency, UNHCR.


Steinacker said that the UNHCR's new high commissioner, Filippo Grandi, has been "very clear" that data held on refugees should be owned by the refugees and should be used for their empowerment.
He continued: "So that is the line on which we are now working ... that the subjects of the data should own the data."

Is simpler better?
Still, other speakers made clear that the ability to identify those in need of the UN's help – and distribute those resources – might not require advanced technological solutions.

Joseph Leenhouts Martin, head of innovation at Gavi, the Vaccine Alliance, said the simplest solution might provide the best service.

"When we talk about technology and innovation, we always talk about what’s the new thing, what’s the big idea," Martin said, concluding: "I’m here to tell you that sometimes the simpler idea is the best idea and we need to be open to that way of thinking."

Posted by Bernice Bartelds at 10:56