If you were a land massed nation inhabited by just over 18% of the world's population, how would you keep your vast regions an multitudes under control? Would you embrace modern technology to keep a close eye on everything? And if so, which technology would you implement on a large scale? Would you want to try it out in a smaller region before subjecting the whole nation to it?

Xinjiang: China's fiercest guarded possession
This is the question that was faced by today's leaders of China. And they decided to zoom in on the part of China that form their Achilles heel: the Xinjiang Uighur Autonomous Region, bordering on Russia, India, Pakistan and five other nations. Rich in gas, oil and minerals and diverse in its ethnic population, it is fiercely protected by China as its long and chequered history bears witness to kings and emperors casting their lustful eyes over the region. But perhaps the most treasured aspect is its prime position on the ancient Silk Road. The ancient caravans have been replaced by a modern railway track, connecting the furthest parts of eastern China through India and Russia, all the way to Europe. A vast and precious region well worth protecting from  foreign meddling, potentially resulting in uprisings and instability. Thus, Xinjiang has become both a fiercely guarded region as well as the testing ground for the latest surveillance techniques.

"I don't want to go out shopping any more"
But what are the ramifications for Xinjiang's inhabitants? They are being watched, tracked and  traced. Each and every purchase, every single movement is monitored. And in true China fashion, any independent thought and action is seen as a threat to the state. Local economies are hampered as free movement is curtailed by heavy handed checkpoints, laborious registration of purchases and long delays to even enter a shopping precinct. Police stations are on every street corner, and military paraphernalia set the tone. Cameras swivel and record every face as biometric features are matched against databases. Xinjiang has become a laboratory of surveillance techniques, and the people are suffering from its oppressive effects.

"It is really cumbersome, nobody wants to do anything any more. I don’t want to go out shopping any more"

Watch this documentary to get a taste of what life is like when biometrics become a state tool for control. 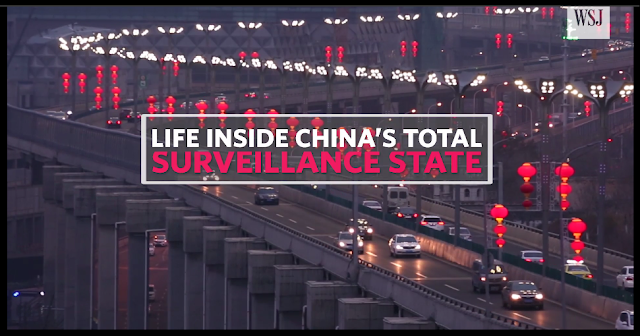 This leaves me with one final thought: would these weary inhabitants of Xinjiang not prefer to be tagged with a convenient biochip, eliminating the need for long queues at the many checkpoints? After all, most surveillance measures already in place worldwide  have been accepted without a murmur: mobile phones with location tagging, biometric unlocking, checking in for flights by walking past facial recognition camera at the airport, banking with a fingerprint...

However, we won't see widespread testing of an in vivo ID until the scientists have come up with a way to dupe the immune system. But that is another story which can be read here: Is there a nanoworm in your vaccine?

Posted by Bernice Bartelds at 14:01