The Mark of Protection

I wrote about the symbolism and identifying nature of the colours red and black in my previous two posts:

A Secret in Plain View: The Circle
http://globalcitizennews.blogspot.nl/2017/05/a-secret-in-plain-view-circle.html

The Symbol of the Scarlet Ring
http://globalcitizennews.blogspot.nl/2017/03/the-symbol-of-scarlet-ring.html

I was interested to see a new application of the now familiar red and black identity during the recent violent protests during the G20 summit in Hamburg: 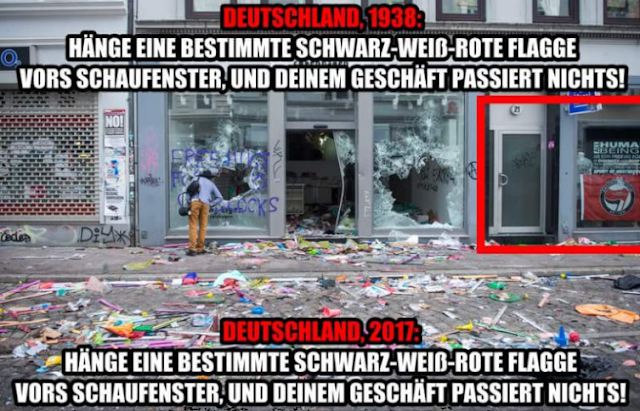 This refers to the so-called Antifa (anti-fascist) flag, of which two version below, the first the original and the second one of its many current versions:

One anarchist discussion blog explained the different versions of the antifa flags:

Antifa is not the same everywhere, in germoney for example we have groups with mainly anarchist orientation, mixed groups with any kind of "leftwing" attitude - and strictly communist groups too. antifa is at least around here no monolithic movement, so it's nearly impossible to speak of "the" antifa in general. anarcho-punk.net

It's a relic from history. The first symbol looked like this, two red flags beside each other. This was during 1930 after the Roter Kämpferbund was outlawed and the german communists needed another militant group to fight of nazis.

Much later the symbol was changed so that the flag behind the first was black, as a shadow. Nowadays it's just two different coloured flags and they are loosely connected to the political affiliation of the people behind it (i.e. either more on the anarchist side or the communist side).

The German AFA is by far the largest and most popular network using the name and thus produces more flags. There are AFA networks or groups all over the world. reddit.com/r/vexillology

Statement of Anarchy
Today, the word 'disruption' has become a salonfahig phrase amongst politicians, business leaders and technocrats. It has become fashionable to use this term instead of 'revolution', 'upheaval' or 'anarchy'. However, very often those familiar red and black colours serve as a very strong statement that the organisation under this flag has a mission to destroy what we have today and force a different agenda onto the world.

Statement of Identity
The red and black statement does more: it identifies its followers to fellow anarchists, as we can see from the example of the shop window in Hamburg. And by displaying it, it provides an additional function of protection.

Mark of Protection
In the Bible we have three mentions of a mark (identifying feature) of protection. The first was in the night prior to the Exodus, when the Israelites kept their first ceremony confirming their entering into their covenant with the Lord God who later became Jesus Christ. By painting lamb's blood on their doorpost, they were protected from the Angel of Death. It was a sign of the covenant, which promised protection from the Lord.


The second was when the prophet Ezekiel described a future time of war and destruction in Jerusalem, and foretold why certain people would be protected:

Here, a certain attitude is noted and marked so that God's protection was given to those of a kind heart. And finally, in the New Testament, another mark of protection is mentioned. Here it is called a 'seal':

“Do not harm the earth, the sea, or the trees till we have sealed the servants of our God on their foreheads.”

The covenant of anarchy that is soon to grip our world and swallow up its global citizens has a sign too. The shop window meme is only a taste of things to come.

Posted by Bernice Bartelds at 10:44