The Mekudeshet Festival: Prayer or Perversion? 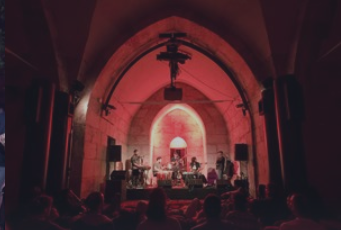 Is it art? Is it music? Is it culture? Is it ecumenical prayer? Or a perversion of them all? Last September in Jerusalem, a cacophony of sounds, dance and whipped up emotion marked an event called the Mekudeshet Festival. 2016 was its fifth year. The organisation is currently busy preparing for its sixth event later this year.

Who is behind it?
The Mekudeshet Festival is hosted by the Jerusalem Season of Culture which in turn is financed by the Schusterman Foundation with its motto: "Igniting the passion and power in young people to create change for themselves and in their communities". It sounds almost like the Global Citizen movement; their website even has a similar feel to it. A short search reveals why: in 2016 the Schusterman blog devoted a long article enthusing about Global Citizen Year, another organisation of the same ilk. Here is another 2016 Schusterman article waxing lyrical about Global Citizen. We can safely assume thet the Mekudeshet Festival, the Global Citizen Festival and their organisational styles are two birds of the same feather. Social entrepreneurship, they call it.

The Choir from Hell
The rest of this article is still a work in progress: I will detail how the Mekudeshet Festival held a ceremony in the Valley of Hinnom, with its Great Gehenna Choir and some very unusual choir pieces.

Is this an ode to Satan?

I will also explore what actually happened during the part of the festival that was held in Jerusalem, and add some write-ups that have been published since.

Finally, I will see if I can identify elements which would put this festival in the realm of covenants. Feel free to look over my shoulder as I gather more information. To be continued.
Posted by Bernice Bartelds at 14:18