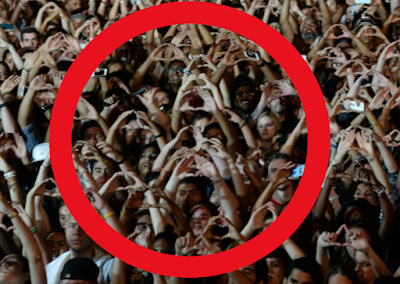 How does the Global Citizen movement manage to draw such massive crowds at its festivals? Over 11,000 concert goers were present at the recent Hamburg Global Citizen Festival. What tools do they have to move all these young people en masse and get them to engage in their agenda to 'end poverty'? I find it quite extraordinary to see such a sea of rapt faces, gesturing their hand signals and holding their mobile phones aloft to capture every moment of the Global Citizen Festival they have worked so hard for. Or have they? Let's see how it works.


... a social action platform for a global generation that wants to solve the world's biggest challenges.

On our platform you can learn about issues, take action on what matters and join a community committed to social change. We believe we can end extreme poverty by 2030, because of the collective actions of Global Citizens across the world.


Spreading the Deception
When you look around the rest of this blog, you will see that this is merely a sanitized way of saying: 'We want impressionable young people to bring our United Nations agenda to every corner of the world. These so-called 'sustainable goals' involve:
Vaccinations are the number 1 priority for the simple reason that they provide the Entry Point for a global digital financial identity - the biometric number on the blockchain without which you will in essence be a non-person without access to the means to stay alive.

The Global Citizen organisation originally came out of the United Nations' Global Poverty Project. In 2015, the UN website gushed about its revamping through a project called "Unlock Your Power":


"Unlock Your Power" will run on Global Citizen from now until the Sustainable Development Goals are adopted at the United Nations in late September."

The official story line of the Global Citizen festival is explained here.

So how can these fuzzy United Nations concepts stir our Millennials into enough conviction to take action in the form of a tweet, an email or a phone call to a politician, a CEO or a 'philantropist'?

How Global Citizen stirs them into action
The answer is: psychology. The Global Citizen leaders use a number of tricks and manipulations to motivate and stir their target audience to action. Here are some of their methods:

1. The Pledge
Humans want to feel good about themselves, and need to be thought well of by their peers. Making a promise or pledging a course of action gives a sense of being accepted and worthy to be part of society. The Psychology of making or breaking a promise:

“Keeping a promise is valued so highly, above and beyond its ‘objective’ value.
When you keep a promise, not only have you done something nice for someone but you’ve also fulfilled a social contract and shown that you’re a reliable and trustworthy person.”

2. Belonging to a tribe
Everyone wants to belong to a group of fellow human beings. Young people are particularly susceptible to this pull - they are at the start of their productive lives and still in search of their own identity, or in the process of affirming it. In their early twenties, their brains are programmed to start families, set goals, provide for their loved ones and their communities and to open their eyes to the world around them. If not firmly grounded in an extended family with clear values and identities, they will find themselves drawn to a surrogate tribe like Global Citizen. The Global Citizen identity and branding is very strong, and designed to appeal to Millennials.

3. Do Something!
The Global Citizen movement knows how to channel the energies of young adults into a low threshold type of action. All it takes is a tweet, and the young mind goes back to the distractions of his regular life. It's so easy!

4. The Reward
Earning points for each micro-action like an email or a phone call stimulates the reward centre of the brain. Undertaking another action reinforces the pleasant feeling of 'doing good', while accumulating points takes the effect that collectors the world over recognise: the thrill of acquiring just one more rare coin to complete a series, finding that comic strip to make a set or for gamers: one more score to move to the next level. It's addictive - the reward centre in the brain is working overtime. Collecting points to win a set of concert tickets is fun, all the more if it is 'for a good cause'. No critical thinking required.


5. The Colour Red
People react faster and more forcefully when they see the colour red, according to a scientific study mentioned on this blog. Global Citizen communications are absolutely drenched in the colour: carpets, podiums, house styles - just take a look around their website and see if you don't start to feel the urge to take some action... Other organisations with similar motives display red prominently as well: The Symbol of the Scarlet Ring.
Together with the whole psychological package of the pledge, belonging to a tribe, taking action and getting rewarded for it, the colour red provides a subconscious tipping point to persuade even the most laid back young adults to become active.

I am sure there must be other psychological tricks that have been applied by the Global Citizen organisation.  I'd be interested to hear what my readers think, so feel free to leave a comment below.
Posted by Bernice Bartelds at 21:36