Reading Over My Shoulder: Disruption Through Social Media

I don't bother with morning papers any more. Nowadays I prefer to grab a coffee and check websites like ZeroHedge to keep myself well informed. Today I'd like to add a few comments to ZeroHedge's article: Researchers Discover That Social Media Can Be Used To Predict Riots, Revolution.


According to recent research from the Pacific Northwest laboratory and the University of Washington, the things we post on social media could be utilized by software to predict future events.

... social media can be used to "detect and predict offline events"

The article poses pertinent questions like "is our government using this kind of technology?" and goes on to outline various programmes developed by tech companies who offer their services to the state. It also mentions how the state profiles individuals:


...the very type of digital communications and transactions now being gobbled up by the NSA, DHS and other government agencies make ideal data for creating reliable models of every individual's habits, preferences and behaviors.

I wasn't supposed to see this...
This reminded me of a news item on German morning television about nine or ten years ago. In the clip, cameras in the street registered a young man's suspicious behaviour around a parked car. The authorities were alerted, and the potential perpetrator's identity was revealed through facial recognition. Additional data were added to his profile, and by the time the hapless gentleman arrived home, a police car was waiting for him by the front door. The system was called INDECT, and I became curious, all the more when the item was deftly removed from ZDF's online archives only an hour later. Being the bored housewife that I am, I decided to find out more.

We are living in a European surveillance state
In 2009 I found a Dutch article (now defunct link: http://www.nujij.nl/tech-gadgets/indect-big-brother-software-opgeschort.12600964.lynkx#ixzz1Y1mldpLo ) which roughly translates as:

The European Union subsidises a system to spy on its own citizens. Indect, as it is called, integrates information from the internet, databases and images from security cameras to enable an automatic scanning system for detecting potential threats and suspicious behaviour.

INDECT stands for Intelligent Information System Supporting Observation, searching and detection for security of citizens in urban environment and is part of the EU Seventh Framework (FP&) programme.  It had about € 15 million to play with over the course of five years. FP7’s security programme received about € 1.4 million. (At the time when the article was published)

This new monitoring and surveillance system was developed by various European universities like York University, Bergische Universität Wuppertal and Carlos II University in Madrid, companies and government organisations. The data are mostly intended for police forces.

Indect is an intelligent search engine for individuals, images, watermarks and metadata. It is designed to track and trace people on the move as well as detect suspicious behaviour based on social media, forums etc.

Furthermore, a European Security Research Conference (SRC09) presentation explains how Indect doesn’t only scrutinise the public internet, but also monitors and analyses individual computer systems. The presentation also outlines how the system will be trialled in a number of pilot cities.

And there we have it: the data can be made available to anyone who has a vested interest and presumably the money to pay for it. Now back to the translation of the Dutch Indect article:

Police are able to predict who will break which law in which location based on private information from a number of sources like security cameras, fingerprint databases, facial scans and financial transactions from bank statements. Personal information can also be mined from the internet and from personal computers. 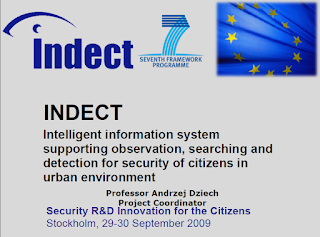 From detecting to fomenting
Finally, I'd like to add one more comment. Detecting unrest before it happens is one thing, but using social media and other technologies to foment unrest is much worse. One name comes to my mind, and no, I'm not thinking of George Soros but another 'Global Citizen' with an agenda all of his own: "I am a global citizen with Bavarian-German roots" Karl-Theodor zu Guttenberg, the German ex-minister of economics and defense who fell from grace but is using his time in the shadows to prepare his revenge.

Zu Guttenberg, or KT as he likes to be known, became an expert in "disrupting and toppling dictatorships" through the use of social media and technologies that enable dissenters to evade being detected online. The project was called "No Disconnect" and was carried out under Neelie Kroes' oversight. In a 2014 Techonomy panel discussion, zu Guttenberg hints at his plans to 'disrupt' the status quo in Europe:


"...many Europeans actually like the aspect of controlling the power, Germans specifically..."

Let me show you a screenshot from KT's presentation: 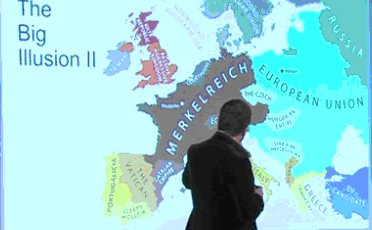 Are we seeing the end result of the kind of disruption KT is planning for Europe? Is this a neo-Hapsburg empire? That would explain the cryptic introductory remark by the Techonomy moderator in the panel discussion mentioned above when he introduced David Gorodyanski:


"David, you’re the co-founder and CEO of AnchorFree, a technology company that reunites or—I don’t know what the opposite of Balkan is, maybe Austro-Hungary or something."
[LAUGHTER]

Remember that name: David Gorodyanski, the European Mark Zuckerberg who is working closely together wit KT to prepare a major disruption in Europe when they deem the time to be right. I hope I'll be able to write more about that later.

Conclusion with a twist
In short: the Zerohedge article is a bit late reporting the facts. The surveillance state is already here. Our governments can track and trace individuals and even predict our future actions. They have been doing this for years, but only the NSA has received publicity and fierce criticism over this. Europe, meanwhile, continues to work on similar nefarious programmes in the shadows, led by Germany. And last but not least, there is one (in)famous power hungry German who prides himself on overthrowing governments in the Middle East while plotting his revenge on the enemies he still has at home.
Posted by Bernice Bartelds at 12:01