The Symbol of the Scarlet Ring

Symbols are powerful tools to make a statement about an organisation's identity. Companies like Coca Cola, Google and Heineken spend fortunes on protecting and updating their logos and house colours. The people behind the Global Citizen movement take their choice of symbolism and branding equally seriously: they picked a red ring as their identifying symbol with a black-and-red house style to match. Taken out of the Global Citizen context, this may sound familiar. Didn't the Nazi movement splash these colours all over their rallies with their black and red swastika banners? But when we read what Wikipedia has to say about this striking colour scheme, we're right back at the Global Citizen philosophy:


... symbols which represent the union of anarchist ideal with labour movement and socialist projects (communitarian society and collectivist economy).

The black and red bandwagon of anarchy
The masculine Nazi swastika with its war machine angles has been replaced by a feminine globe shape, but the colour scheme is still the same. Global Citizen is supported by leaders like Neil and Glenys Kinnock, Cherie Blair and her husband Tony Blair with his Institute for Global Change and many others who devote their time and resources towards a global communitarian corporate socialist agenda. The red ring is a give-away for their radical disruptive philosophy. Let's look at another organisation: Project Everyone.


Project Everyone seeks to put the power of great communications behind the Sustainable Development Goals (also known as the Global Goals), accelerating the creation of a fairer world by 2030, where extreme poverty has been eradicated, climate change is properly addressed and injustice and inequality is unacceptable.

Our mission is to ensure that everyone on the planet knows what the Global Goals are, so that they stand the greatest chance of being achieved.

The logo for Project Everyone consists of a plain red circle. Their house style is almost identical to Global Citizen with the same font and red text highlights. Their aim is for every child to grow up with their seventeen Global Goals, which are the Global Citizen's 'constitution' and the oath by which adherents swear their allegiance to this twisted covenant of slavery. Readers who are familiar with the Common Purpose infiltration to disable and incapacitate nations' institutions should recognise the Global Goals' rainbow colours - another symbolic colour scheme.

And perhaps we should also add the Global Citizen Band to the mix. Their lyrics speak for themselves.

Follow the trail of the ring of scarlet
Having identified a common pattern of a red ring or circle for these key organisations with the same philosophy, we can now be on the lookout for other organisations with the same belief system. So let's see: if I were them, I would build a platform for spreading these ideas to harness the generation through which I would want to achieve my goals: the tech-savvy Millennials. Or even better, buy an existing one that is already popular with the target group. An organisation like TED.

New TED owner, new house style
Over the last decade or so, TED talks have become increasingly popular. These Technology, Entertainment and Design events originated in Silicon Valley, but soon drew a larger public when the organisers decided to invite speakers from more varied backgrounds. Free access on YouTube from 2006 onwards increased audience numbers even more.

In 2011, the TED organisation was sold to Chris Anderson, a young media entrepreneur with an interest in technology who had become rich and successful in a very short time. In 2002, before he bought TED, he gave a talk entitled TED's Nonprofit Transition. He pledged:


"I will promise you here and now that the core values that make TED special are not going to be interfered with. Truth, curiosity, diversity. No selling, no corporate bulls***t, no bandwagoning and no platforms."

Body language experts would probably explain the signs he displayed as someone who feels uncomfortable telling the truth, but I think he kept touching his nose because it was itchy. However, TED participation was soon to be by invitation only, with membership prices ranging from $7,500 to $125,00. From The Tyranny of TED:

Speakers with corporate ties feature regularly, and as for bandwagons: Chris Anderson himself  is one of Global Citizen's CEOs.  TED has ceased being an open platform where fresh new ideas are presented. Censorship of the TED talks began to raise its ugly head in 2013 when several original presentations were banned. More evidence of such close scrutiny emerged when a remarkable TED talk was withdrawn shortly after it started to attract a high number of hits. The subject of this hastily silenced presentation was the use of hallucinogenic plants to communicate with the Earth goddess. Perhaps they deemed it to be too premature to share their deepest core convictions with the general public.


More red house styles: coincidence?
The most striking transformation of the TED organisation was its new house style: from nondescript neutral grey tones to the now familiar cutting red and black designs. Speakers now address their elite audience standing on a prominent red circle. Red spotlights pick out details in the black backdrop, and the scarlet ring featured at the beginning of the presentation provides a strong visual link to Global Citizen. TED topics now range from transhumanism to education and methods for toppling governments. Aspects of disruption and anarchy are expounded on, and many Global Citizen leaders enjoy the limelight.

More coincidences?
Once we start to look around, we can identify other red branded organisations that are working towards the same goal of globalism. The Globalist magazine, working towards a united global economy. The Atlantic Council's Global Citizen Awards. The now extinct Lucent Technologies. Even the BBC is beginning to look suspect with its succession of red circled 'idents'. The Dutch state news organisation NOS carries the same red circle as the Global Citizen website, apparently with no objections made. All these organisations bring us narratives, technologies and strategies to condition us to accept their ideas.

Coincidence? Perhaps. Except that all these organisations broadcast the same global views, steadily working towards uniting and connecting us to their new world order through the symbol of the scarlet ring. 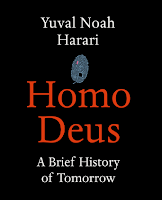 Since posting this, I have become alerted to this black and red colour scheme. So when I came across a book entitled Homo Deus by Yuval Noah Harari, I just had to buy it. It didn't take me long to get the flavour of the writing, so I am adding it to this post as a reading tip. Pick up a copy for yourself and get a sneak preview into the minds of the people who are working towards this new world order. I believe that the red and black design is their calling card.

Another book I picked up (I'm really into this black and red stuff now) was written by Mr Global Citizen himself: George Soros.

Please leave a comment below if you have found any more globalist organisations with the aim of communicating their message of their communitarian fascist world.

Posted by Bernice Bartelds at 15:29