Why was there no mention of biotech developments at the recent ID2020 Platform for Change Summit? Is the topic of nanotechnology, biosensors and other cutting edge identity carrying devices taboo? Accenture MD David Treat alluded to an earlier discussion that was kept out of publication when he said:


"I appreciate the point that biometrics is on the way out"


Biometrics not suitable for universal ID?
Biometrics refers to metrics related to human characteristics like fingerprinting, facial recognition or iris scans. Current biometrics are quite foolproof and tamper-proof: modern fingerprint readers scan the tissue underneath surface fingerprints and can detect whether a finger is real or synthetic. The Indian Aadhaar biometric identity system relies on a combination of ten fingerprints, two iris scans and a photograph, which makes it extremely reliable. So why is biometric technology supposed to be on the way out? Perhaps a the lack of universal scanners if the global ID system were to be implemented for just about EVERYTHING?

The deafening silence
The soon to be implemented digital identity is to be used for applications as diverse as accessing a bank account, catching a train, getting a tooth filled, borrowing a book from the library or taking an exam. If the ID2020 system goes ahead without any delays, babies from the age of 6 weeks (or whenever they receive their first vaccination) will have their data stored based on their unique identifying number. As they go though life, their medical history, DNA, education, social connections, taxes, acquisition of property, spending behaviour, travel history as well as their religious and political views will be stored, profiled and monetised by authorities, institutions, companies and individuals. Having their fingerprints and irises scanned at every transaction or mutation would be too cumbersome, time consuming and psychologically confrontational. Invisible scanning would be far less threatening and invasive. An injectable biosensor would be the only way to achieve that, but there is a deafening silence on this particular topic among the speakers who wax so eloquent about the virtues of a digital ID for everyone. If they are so well informed about identity technology, why keep silent about the only one that ticks all of their boxes?

If we want to know how far advanced their plans are, then we need to go to the biotech insiders: their newsletters, their money sources and their conferences like this one:

The global market for biosensors is expected to reach over $25 billion by 2020. With biosensor applications in such areas as healthcare, environmental, industrial, security and defense, this market is expected to achieve exponential growth over the coming years. This conference track will focus on the latest in commercialization and technological advances in biosensors and will include such areas as:

The market demand for implantable biomedical systems continues to grow at a significant pace. Solving the technological hurdles of miniaturization, power supply and efficient interfaces between the implants and external devices is critical to the growth of the market. This symposium will examine the latest advances in manufacturing, wireless charging and communications for implantable biomedical systems from both a theoretical and practical standpoint. 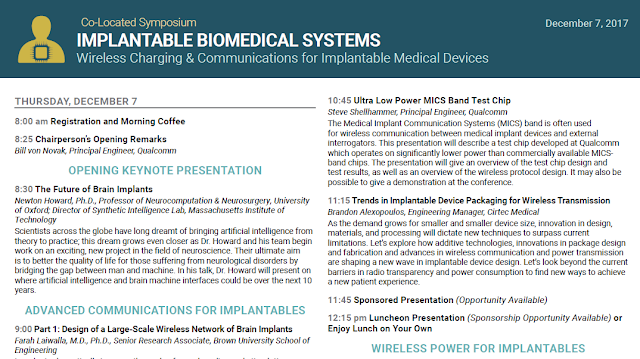 The future of BRAIN IMPLANTS? Download here
Breakneck speed
Biosensor technologies are being developed at breakneck speed, with new applications and combinations with other technologies sprouting from their inventor's brains in quick succession - just think of what would happen if personal digital IDs were linked to the Internet of Things! These new technologies put a lot of power in the hands of a few heedless adventurers, with caution being thrown to wind. This should be enough to alarm even the most trusting among us. This upcoming biosensor summit should give us a better idea of things to come.

In my next post I want to take a look at some big names. You might be surprised to find out what Google and Apple are spending their energies on.

Posted by Bernice Bartelds at 23:16